Cunnamulla Accommodation Story G’day everyone, my name’s Tristan Evert and I’m the newest addition to the Out the Back Australia team which includes the heritage Club Boutique Hotel top quality Cunnamulla Accommodation. I am a qualified journalist after completing a degree in journalism at Griffith University on the sunny, Gold Coast.  I was born and raised on the Gold Coast, however have enjoyed numerous travels west to Queensland’s Outback, with family in both Cunnamulla and Winton.  This fun outback travel has inspired me to share the many unbelievable, authentic outback adventures I have had.

I am passionate about sport and travel and I will use my skill and love of writing to take you on a journey to Outback Queensland to live Australia’s Story by unearthing the history.  On the way I will share the secret locations, the best adventures and the biggest characters Outback Queensland and Cunnamulla has to offer starting with members of my own family.

Full of knowledge that births from a rich history in the far reaches of the Australian outback.

It is quite amazing when you discover that two locations in Queensland’s Outback that are close to the heart of my family being Winton and Cunnamulla have strong links going back to the late 1800’s and here is a little about this Australian Story.

My great great grandparents, Catherine O’Rioden and William Robert Clayton were both drovers that toured the rugged landscape of Australia with regular routes from Wellington in New South Wales to Boulia in Queensland. Originally from Ireland, Ms O’Rioden boarded a ship in sight of Australia out of desperation, however was shipwrecked in the red sea. She was rescued and given a job in the North Gregory Hotel Winton when she met another Irish lady named Norah Howard who was the owner of the Boulia Hotel.  Later Mrs Howard wrote to Catherine inviting her to move to Boulia and work for her at the Boulia Hotel.  Catherine quickly accepted and made the journey to Boulia and this is where she met William Robert Clayton and married.

The pair called Bourke, Hungerford, Thargomindah and Cunnamulla home as they travelled constantly around, running hotels and droving cattle for themselves and others. At one stage they were droving 500 head of cattle towards Bourke when they ran into the legendary ‘Sir Sidney Kidman,’ who offered them a fortune for their cattle.  Over the years they had many encounters with Sir Sidney Kidman as they drove cattle for him and sold him a property they owned including Currawinya which is now a national park and great tourist attraction.  My great Grandmother often recalled conversations between her father and Sir Sidney with one being a tongue lashing to her father as her brother Bill was riding in a saddle with a broken tree.  When you hear stories of the legendary Sir Sidney Kidman you instantly get an image of a big strong man however Gran often recalled that Sir Sydney had a really squeaky voice and was small.

Born in Bourke, my great grandmother Margaret Clayton (nee Emery) grew up on the droving trails, sleeping under the stars every night, a real kid of the outback. There were not many if any luxuries and they made a new camp every night which was deemed upmarket if there was a kitchen made from Gidyea posts and old kerosene tins.  In school we were taught history that often included bushrangers however my great Grandmother Margaret and her mother actually lived much of Australia’s Story and would often reminisce about having tea with the Mrs Hall, the wife (or ex wife) of famous bushranger Ben Hall. 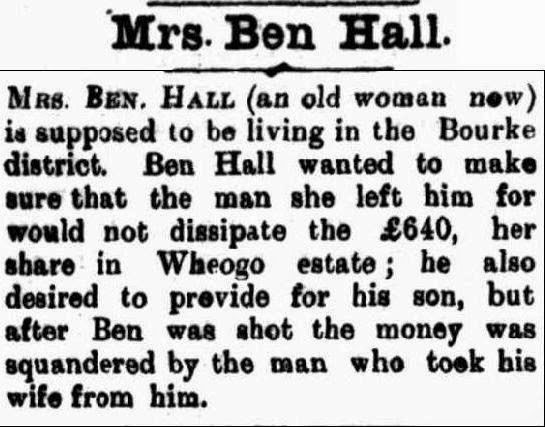 A regular route was from Bourke to Thargomindah via Hungerford and back in those days Hungerford the town located on the boarder gate between New South Wales and Queensland had two hotels.  Margaret was 15 and had just completed her schooling at the Catholic School in Bourke when her mother Catherine purchased the Commercial Hotel in Hungerford.  At the time it was busy with high numbers of drovers, shearers, bullockies, Cobb & Co Coaches and swagies making their way for work.  Today the hotel is long gone and only the Royal Mail Hotel stands in what has become an isolated and quiet place on the boarder gate.  This may well be where her granddaughter Peieta Mills drew her inspiration to re-open and renovate the historic Cunnamulla accommodation at Club Boutique Hotel that often hosted royalty.

At age 17 Margaret drew a Thargomindah property in a ballot and the family settled and worked it.  At the age of 26 Margaret Clayton married Steven Emery, from Thargomindah whom was known to everyone as Bub. The Emery family were know as mail contractors running mail trucks all around the district which was often referred to as ball bearing droving.  Together Gran & Grandad Bub had five children, Peg Campbell (nee Emery), Tom Emery, Elsie Burke (nee Emery), June Evert (nee Emery) who is my Grandmother and Chris Mills (nee Emery) who is Peieta’s mother.  In 1943 the family moved to Cunnamulla, where Bub began operating his own mail runs and developed a wool carting business. Margret became well known to all in Cunnamulla and was fondly called Gran by many. A true outback icon that spent her 96 years of life in the outback.

This diverse and extensive outback family history provides me with an extremely unique insight into outback culture, characters and life that I will enjoy sharing with my audience via my Tristan Evert Journalist articles. Full of amazing tales and adventurous stories, you will be left wanting more.

I come from a long line of country icons that have done some extraordinary things. I am an Evert and the Evert family were explorers, trail blazers and innovators with a passion for Australia, Outback Queensland and the Queensland town of Winton.   My great uncle Vince Evert was a visionary, originally the owner and picture show man, running one of the last open air theatres in Australia before furthering his enormous passion for open cut opal mining. He took the opal and travelled around the world, realising the enormous potential in over seas markets. He visited places like Japan and America showcasing opal and slowly creating the company now known as Evert Fine Jewellery. In the early days he would often bring people from all around the world to his fields and give them the outback Queensland experience, an early example of outback tours.

Vince, as well as his two brothers Neale and Peter are famous for promoting outback Queensland and they saw opal as an opportunity to bring people out. The trio journeyed all over the outback promoting tourism in their home town of Winton as the future that would keep the bush alive. No one believed Vince but he had tremendous vision and faith and because he was so highly regarded people followed his lead. Vince has since passed on but has a prestigious tourism award named after him, the Outback Tourism Queensland Association’s Vince Evert Award. Not only the Evert side of the family are prominent in outback Queensland, my other side of the family also hosts some quite spectacular outback figures and characters.

You can expect scandals, love, loss, war, peace, struggles, achievement, adventures, history characters and progress. Everything that makes the outback great, that unbreakable spirit, amazing country mateship and a never give up fight for survival.

Something that everyone should experience at least once in his or her lifetime. If you’re searching for an unbelievable, authentic outback adventure then come on this written journey with me until you are inspired to make your own booking into the Club Boutique Hotel the best Cunnamulla accommodation along the way. Meet the locals, experience nature and discover the wonderful secrets of Cunnamulla and Outback Queensland.